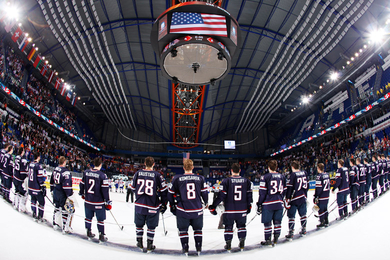 KOSICE – With two wins to smile about, and a place in the Qualification Round already locked up prior to todays game against Sweden, the guessing is that things are much, much more pleasant for USA Hockey officials than they were one year ago.

The U.S. team will face its toughest test yet at this years World Championship when they meet the Swedes. But at least you get the feeling theyre up for the test. They seem a confident bunch. That confidence wasnt radiating from the team much at all last year. Remember the waking nightmare that the 2010 World Championship was for Team USA?

It started off with the tough task of facing the host nation, Germany, in a converted football stadium filled with 77,803 (mostly) German fans. The inspired Germans won 2-1 in overtime. That was a bump in the road. The bump caused things to start to wobble a little and, in their second game, they lost another 2-1 overtime game – this one to Denmark, a team ranked 13th in the world at the time. The wobble then turned into steering trouble as the vehicle veered towards the ditch with the Americans losing another close game and then having to play in the relegation round. In the end, they managed to get things back on the road by winning three games and avoiding relegation.

So, time for a fresh approach. Only two players from last year’s team are on this year’s squad (forward Chris Kreider and defenceman Jack Johnson) and, significantly, there are 12 players on the roster who have never played for the U.S. men’s national team before.

“I think we play with a lot of confidence,” says Johnson. “We have a bit more swagger than on last year’s team. We’re an attacking team instead of just sitting back.”

It is early in the tournament, but Kreider has been one of the most impressive Americans so far. Here he is, just turned 20 years old, and already playing in his second World Championship. Burke hopes that Kreider – and others like him – will form a solid core of young players who will get excited about coming to the tournament and not view it, as many players do, like something to be avoided after a long season. This year’s team features 11 players who have come up through USA Hockey programs and won a medal at an IIHF competition.

“This is a very important tournament for us,” says USA national team advisor Brian Burke. “These are guys we’re going to count on down the road. We’re trying to get a mentality where guys come into the U18, and they continue to the national junior [U20] team and then continue to play for us in tournaments like this.”

Having dedicated young players who care about the World Championship is a good start for the USA Hockey as they try to build some interest in tournament back home – some success would also help that along immensely. Everyone loves a winner, and “winning” and “USA” has not been synonymous at the World Championship. The Americans have won the tournament once (in 1933) and, in the last 30 years, have only two bronze medals to show for their collective efforts.

“There’s not a huge amount of emphasis in the United States on success in this tournament… not a lot of people know about it,” says Kreider. “We’re hoping to change that, obviously. We need to win. Success breeds success. Maybe if we start winning, more people will pay attention.”

Reflecting on last year’s trip to the relegation round, Burke disputes that it was all as bad as it looked.

“Last year wasn’t a disaster. The reality was that we lost three one-goal games, and two of them in overtime,” recalls Burke. “The biggest problem was that we only scored four goals in those first three games. You’re not going to win over here if you do that. So, this year we tried to have a little more offence, a little more foot speed. So far, so good.”