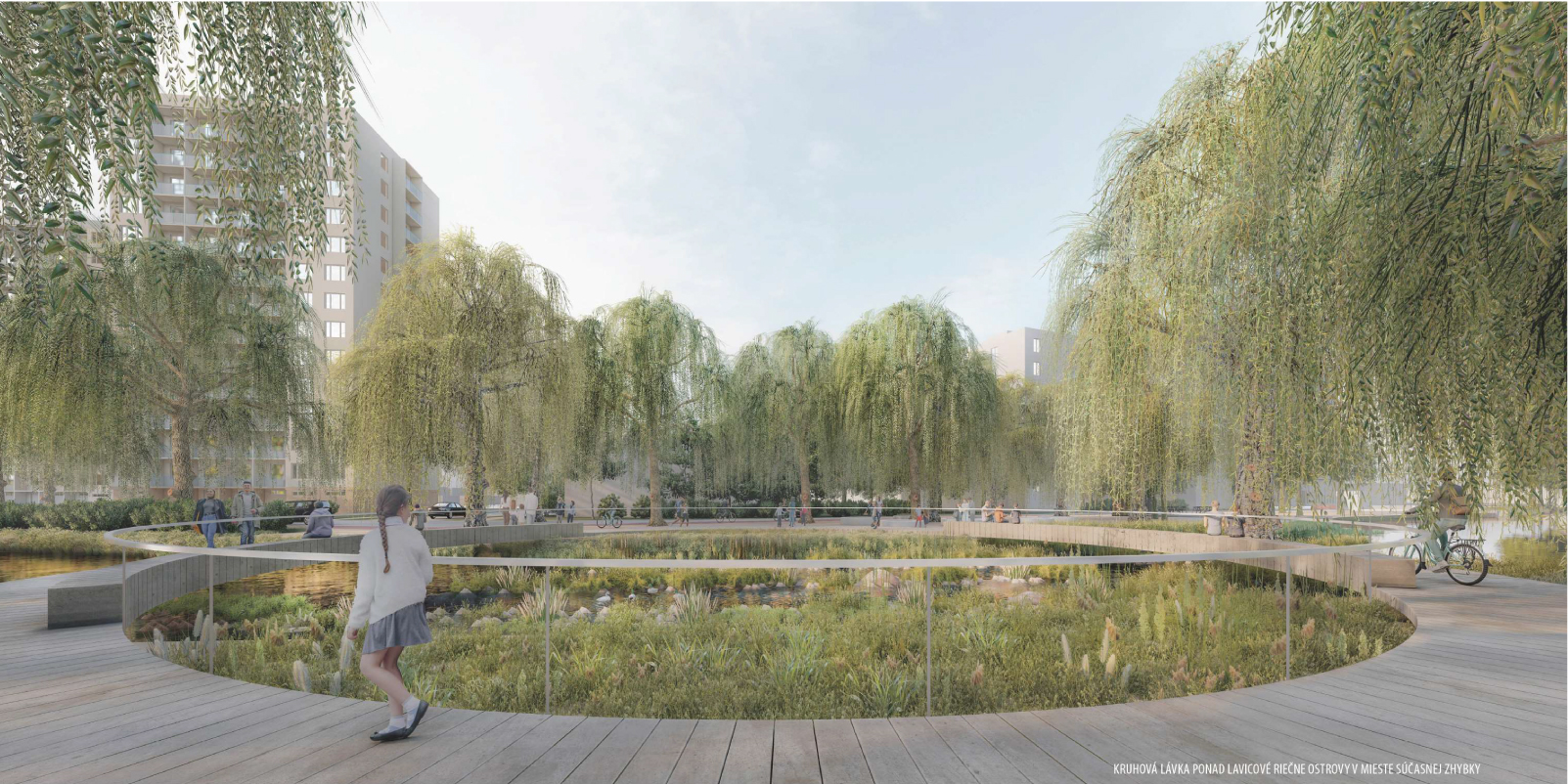 The collective of authors: Tomáš Hanáček, Katarína Fejo and Katarína Gloneková have become the winners of the landscape-urbanistic competition - „Revitalization of the city part Mlynský náhon/Mill Race” announced in July 2020 by the City of Košice in cooperation with the Civic Association - Mlynský náhon. Last week it was unanimously decided by the jury consisting of 5 members led by Ms. Jana Pyšková who announced the results of the whole competition.

In September last year, the jury selected the five best collectives under the delivered competition materials from among the 15 registered participants. The aim of the competition was to find the most suitable solution for the alternation of the 14-hectar plot of land located in the wider centre of the city and to convert it into significant relaxation-recreational unit with water surface. The additional required parameters involved the development and retaining of the biodiversity in the surrounding urbanistic conditions.

The winning tender proposed some changes in the transport infrastructure of the adjacent Gorkého Street.

Four tenders were finally submitted for evaluation. All the finalists were awarded by a premium of 4000 Eur. The authors of the best proposal have to sign a contract with the City of Košice for administering the order and the licensing fees for the authorial supervision in amount of 49 000 Euro based on the successful project.

The authors of the wining proposal perceive the Mlynský náhon as a key element of the identity of the city that might have changed gradually. Their vision involves the „calming down of the transport“ in the concerned territory by means of reducing the four-lane road of Gorkého Street to three traffic lanes. At the same time, there would be established new “micro-spaces” that might support here the community life in different ways.

The water in the Mill Race would represent a „living river“ serving to different water-sport activities and boating. The additional recreation activities include building up new sidewalks for both the pedestrians and cyclists.

The submitted proposal concentrated on the Watersport Club on the left bank of the Mill Race not far from the bridge at the Hlinkova Street where it is supposed to create a planned connection between this stream and the Hornád River. It will be connected with a new skate-park, set in the green zone on the right bank. Next to the Rokoko restaurant, it has been proposed a water garden as a component of the adaptation measures related to the climate changes. The proposal counts on a creative solution of overbridging the stream at the Rokoko restaurant and opening the underground part of the Mill Race /Mlynský náhon/ from the bus-stop Mlynská bašta and its extension to the Jumbo cultural centre.

The jury appreciated the footbridge "roundabout" next to Rokoko restaurant

„The technical problem of hot-water tubes has been tackled by an atypical circular component having a potential to become an “iconic point” of this water scheme. Reducing the transport on the Gorkého street will enable to connect the cultural centre Tabačka visually and functionally with the neighboring Hotel Yasmin that may allow there the possibility of boating on the water of Mlynský náhon in the summer time and skating in winter. The designed square is a great urbanistic component with a clear cultural function,“ – stated the winner proposal of the authors led by Tomáš Hanáček.

The jury In its evaluation highlighted the fact that the winning solution brings a high cultural level, high quality of life and a sophisticated design, and it is gradually turning the built-up area into an eco-stabilizing factor. They assessed positively also the respect for the individual needs of the population or the overview of the elaboration of the overall concept of the concerned area. According to the jurors, this gives excellent preconditions for finalizing the details of the proposed solution. They also appreciated how the authors dealt with the resolution of the problematic "bend" at the restaurant Rococo, which would be in the shape of a circular footbridge.

„The proposal is ambitious but it fully respects the principle of feasibility. The philosophy of the relaxation – social zone with functional and social connections to the related horizontal localities and premises leads the visitors to go through the whole trace of the Mlynský náhon starting from the south to its northern part, with a gradual various exploitation of the individual functional points, attractions and places. The accessory vegetation of the water course has been designed proportionally to the diversity of the functional units,“ – said the jury in its published evaluating protocol.

The Vice-Mayor M. Gibóda appreciated that the project might be implemented gradually under its different stages

The jurors also recommended that the City of Košice apply for resources from Eurofunds due to the financial demands related to the conversion of the area around Mlynský náhon. The estimated amount of the financial costs make 1.9 million euros. The Vice-Mayor of the city, Marcel Gibóda (independent) confirmed that the city management would be interested in these financial resources. He emphasized that increasing the attractiveness of this part of the city will be of great importance not only for the citizens of Košice; it will contribute also to the potential of the city from the aspect of the domestic and foreign tourists.

"The positive feature of our approach is not only the overall view on the given locality. We will focus our attention also on the water stream and the transport connections and the everyday movement of the pedestrians. It is also important to divide the process of revitalization into stages, which make the implementation of the project simpler. The competition for this project will serve as an example for the adaptation of future territories. I would like to emphasize especially the communication with the public whom the area of the Mill Race has to serve. Such a territory is attractive for our efforts to become a greener city and to adapt our strategy to the climatic changes. And this is why we have decided to use up for this purpose sources from the Euro funds in the new programming period 2021 - 2027."

The director of the civic association OZ Mlynský náhon, Eugen Ščavnický, considers the greatest contribution of the revitalization project of Mlynský náhon the engagement of the city, city wards and the professional and lay public. As he noted, it is the sign of the fact that the wider public understands the value of public spaces and it is interested in its development.

"We were very pleased with the consent of all the competitors to reduce the traffic load in the broader city center and to create pleasant public spaces for people with the incorporated watercourse. The proposals will bring a valuable part of natural scenery into the urban environment and they offer adequate conditions for the development of biodiversity in the city. I would like to emphasize the excellent approach of the staff of the Department of the Chief Architect of the city, the jury, the invited experts and the administrator of the watercourse, which had a decisive influence on the process, and result of the competition. We believe that the renewed Mlynský náhon will provide our citizens and visitors new opportunities to relax in the pleasant environment of the watercourse” - he stated.