France moves on with OT win 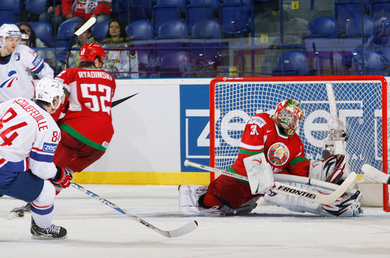 Hecquefeuille was left alone in the slot and drilled a hard shot past Andrei Mezin for the historic victory. The nations have played only three times previously in senior competition, Belarus winning all – a 3-1 win at the 2008 World Championship and twice at the Olympics.

"We were so tired in the overtime. It was just amazing. What a great feeling," said a jubilant captain Laurent Meunier. "This is so good for us."

As much as the game-winning goal was the deciding factor, the play of goalie Cristobal Huet was also vital. He stopped 37 of 38 shots, including a penalty shot in the third period, to backstop the victory.

"For us, its our gold medal to go through to the next round and play some good teams," said Huet. "We have guys on our team who are working part-time, who are good players, and some guys really need jobs in order to play. Its not easy. Im glad I can contribute."

Given the importance of the game, it was surprising to see Belarus start the game flat and uninspired. In fact, the French, surely the underdogs, played with greater confidence and determination, and they were the ones justly rewarded.

Not only did they outshoot Belarus 16-9 in the period, they struck on a power play midway through. Hecquefeuille's point shot was nicely deflected in front by Sacha Treille who was among a scrum of players in front of goalie Andrei Mezin.

France continued its masterful play in the second period, playing stifling, aggressive defence in all areas of the ice. This meant an up-tempo forecheck, lining up across centre ice, and keeping Belarus to the outside during rare forays into the French end.

The best scoring chance of the middle period came when Dmitri Meleshko got the puck in the slot, but it was on end and Huet made a fine glove save. After that, France dominated, cycling well in the Belarus end, creating some scoring chances, and playing a superior brand of hockey all around.

France tried to sit on the lead in the final period and nearly paid the price. Belarus had several fine chances on Huet, none better than a penalty shot by Andrei Stas. He split the defenceman and was hooked by Hecquefeuille, but he tried to go over Huet's blocker and was stopped by the goalie.

"I looked back," Huet admitted, "because I thought the puck had squeezed through my arm and body, but it didnt, thankfully."

A short time later, Sergei Demagin just missed the top corner on a great chance, but moments later he connected. A harmless point shot went off the leg of defenceman Vincent Bachet, and Demagin was right there to swat it in. That led to the overtime and Hecquefeuilles heroics.